What to know about Illinois’ graduated income tax proposal 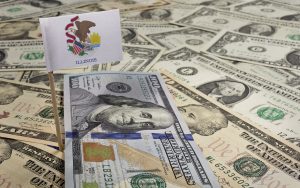 There’s one major question that will appear on every ballot in Illinois this year that could impact your bank account: a vote to change the state’s income tax from a flat rate to a graduated tax.

Here’s a look at some of the key things to consider when deciding how you want to vote on the proposal:

What is a graduated income tax?

A flat tax rate, the structure Illinois currently has, is one rate for all, regardless of how much money you make. A graduated income tax, also called a progressive tax, is a tax structure that levies increasingly higher tax rates on higher-earning individuals or businesses. Essentially, under this kind of system: the more you make, the more you pay.

What other states have a graduated income tax?

Thirty-two other states in the U.S. and Washington, D.C., all have some form of a progressive income tax, ranging from 0% on the lowest earners in South Carolina to as high as 13.3% on incomes over $1,000,000 in California. Illinois and its Midwestern neighbors Indiana and Michigan are three of eight states that impose a flat tax.

Illinois’ current individual income tax rate is a flat 4.95% for everyone. It’s a flat rate across the board because the Illinois Constitution dictates that any income tax imposed by the state be “at a non-graduated rate.” Any amendment to Illinois’ Constitution, including the removal of that requirement, requires ratification by voters in a general election.

What has Illinois’ income tax rate been in the past?

Rauner campaigned on proposals to limit the power of public employee unions, change the workers compensation system and more to bolster Illinois’ economy, rather than increase taxes. That put him at odds with the Democrat-controlled legislature, and thus ensued a more than two-year state budget impasse – the longest in U.S. history – that devastated schools and social service agencies statewide and ballooned Illinois’ bill backlog to more than $14 billion, worsening the state’s already tenuous financial situation. In 2017, the legislature, in a bipartisan vote, overrode Rauner’s veto of a budget that included a tax increase, ending the impasse and bringing the rate back up to 4.95% where it remains today.

To read the complete article posted September 25, 2020, to the nbcchicago.com website, please click HERE.  Or, if you have questions specific to your business or personal taxes contact a Dugan & Lopatka professional at (630) 665-4440 or info@duganlopatka.com.

Use technology to control costs in your construction business